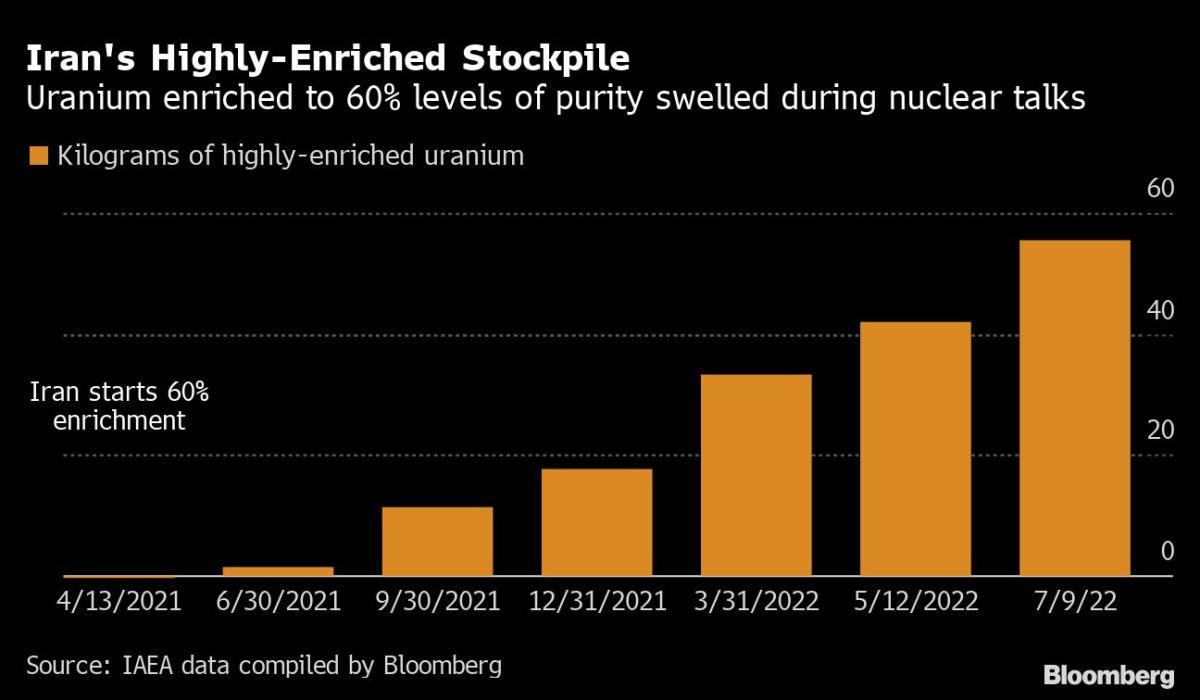 The International Atomic Energy Agency report shows the resilience of an Iranian nuclear program that continues to grow, despite a wavering economy that’s helped to fuel internal dissent. It’s the eighth-consecutive quarter that Iranian engineers increased the country’s volume of nuclear fuel enriched to just below the grade needed for weapons.

Iran’s expansion of its nuclear program — undertaken after the US broke a 2015 agreement and reimposed sanctions — is taking place amid reduced oversight by IAEA monitors, whose investigation into past activities continues to be stonewalled.

The IAEA “is seriously concerned that there has still been no progress in clarifying and resolving the outstanding safeguards issues,” read a restricted report seen by Bloomberg. The investigation has “to be resolved for the agency to be in a position to provide assurance that Iran’s nuclear program is exclusively peaceful.”

Iran has demanded the agency end its probe into the source of uranium particles detected at several undeclared locations as part of any deal to roll back its nuclear activities and restore the landmark accord. The IAEA said it will send a team of investigators to Tehran at the end of November in the latest effort to conclude the probe.

The US and other world powers have offered sanctions relief if the Islamic Republic curtails nuclear-fuel production, but they insist it’s up to the IAEA to declare an end to the investigation.

“The JCPOA is not dead,” Grossi said. “It is struggling. Negotiations are ongoing, albeit at a painfully slow pace.”

Thursday’s statement comes as Iran also faces mounting criticism for supplying Russia with military drones for use in its war on Ukraine. On Nov. 1 the US said it was worried that Moscow may also acquire surface-to-surface missiles form Tehran.

The IAEA reported Russia returned about 3 kilograms (6.6 pounds) of 20%-enriched uranium, which Iran was originally forced to export under the nuclear deal. It was the first shipment since the US waived some Trump-era sanctions in February, allowing limited civilian-nuclear transfers to take place.

“We have to differentiate our strong support to the demonstrators, and especially to the courageous women in Iran, and the need to try to avoid Iran becoming a nuclear power,” Borrell said at a meeting of Group of Seven foreign ministers in Muenster, Germany.

Talks to rein in Tehran’s nuclear activities in exchange for easing sanctions, including those on oil exports, have been on a knife’s edge since European negotiators in August proposed a final 25-page draft agreement after almost 18 months of negotiations.

IAEA inspectors would need at least two to three months to verify Iran’s conformity with a deal, should one eventually be struck. That’s double the amount of time monitors would have needed earlier this year and a direct result of the expanding scope of Iran’s nuclear program.

Verifying compliance with a revived nuclear deal “would take a considerable time to establish and would have a degree of uncertainty,” inspectors wrote. “The longer the current situation persists the greater such uncertainty becomes.”

The nuclear deal unraveled after then-President Donald Trump withdrew the US in 2018 and reimposed sanctions. In response, Iranian officials expanded the country’s nuclear program.

Tehran denies it’s seeking to build atomic warheads but concerns it might develop the technology to do so propelled years of diplomacy that led to the deal with world powers.

The IAEA’s 35-member board of governors meets Nov. 14 in Vienna. Diplomats passed a resolution to formally censure Iran for its lack of cooperation during a meeting in June but abstained from doubling down on the measure at their last gathering three months ago. The country has previously been referred to United Nations Security Council for violating its obligations.

(Adds Tehran visit in the fifth paragraph, Russia uranium transfer in the 10th)