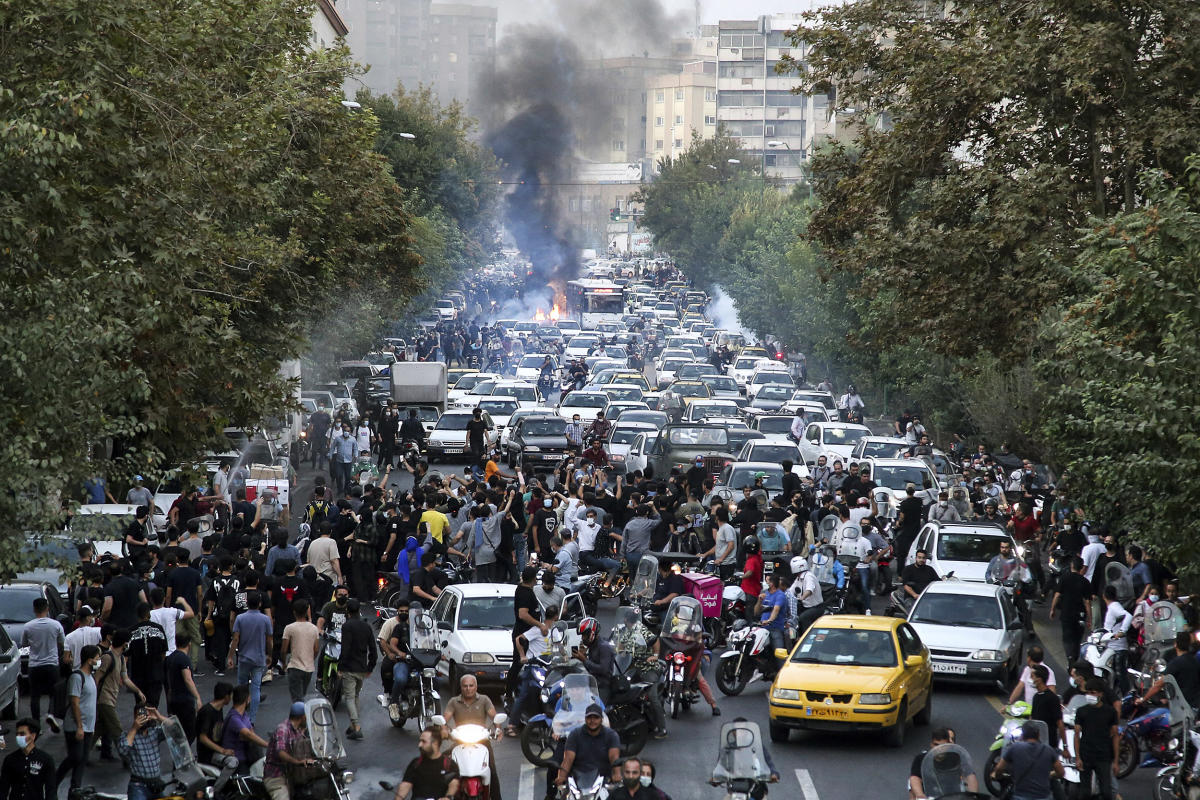 A false claim that Iran is planning to execute thousands of people has gone viral in the wake of the first death sentence for a protester tied to the ongoing demonstrations against the country’s clerical rulers over women’s rights.

An image that has circulated widely on social media falsely states that 15,000 protesters have been sentenced to death. That claim is not true, but has been amplified by major public figures including the actresses Viola Davis and Sophie Turner and Canadian Prime Minister Justin Trudeau. Representatives for Davis did not immediately respond to a request for comment. Representatives for Turner declined to comment.

The claim gained the most attention on Instagram, where a viral infographic claiming “Iran Sentences 15,000 protesters to death — as a ‘hard lesson’ for all rebels,” was viewed more than a million times after celebrities like Davis and Turner shared it on their verified accounts on Monday. The post no longer appears on Davis’ account, but was still up on Turner’s as of Tuesday afternoon.

On Twitter, however, the false claim continued to spread on Tuesday without any warning about its factual inaccuracy.

On Monday evening, Trudeau shared a post saying “Canada denounces the Iranian regime’s barbaric decision to impose the death penalty on nearly 15,000 protestors. These brave Iranians were fighting for their human rights — and we continue to stand united in support of them, and united against the regime’s heinous actions.” The post remained up for over 11 hours and was shared thousands of times before being deleted.

In a statement provided to NBC News, Trudeau’s office said: “The post was informed by initial reporting that was incomplete and lacked necessary context. Because of that, it has since been deleted.”

Other users on Twitter have also posted content that remains on the platform sharing the false information with no appended notes about its inaccuracy.

Like much viral misinformation online, the claim about the 15,000 death sentences appears to have started with a kernel of truth. After weeks of protest in Iran following the killing of 22-year-old Mahsa Amini, who died three days after police took her into custody, the treatment of detained protesters has gained widespread attention.

The U.S.-based Human Rights Activists News Agency said that 15,800 protesters have been detained and 344 killed since the protests began. Independent reporting is suppressed in Iran and it is not possible for NBC News to confirm these numbers.

CNN reported on Wednesday, Nov. 2 that special Iran human rights rapporteur to the United Nations Javaid Rehman told the U.N. Security Council that some estimates of detained protesters were as high as 14,000 people. NBC News has not verified that number.

Two weeks ago, IRNA, Iran’s state-run news agency, reported that 227 members of Iran’s 290-seat Parliament had signed an open letter to the country’s judiciary seeking swift and harsh punishment of detained protesters. NBC News has not seen that letter.

The state-run news agency said the letter did not suggest a method of punishment, but read, “We, the representatives of this nation, ask all state officials, including the Judiciary, to treat those, who waged war (against the Islamic establishment) and attacked people’s life and property like the Daesh (terrorists), in a way that would serve as a good lesson in the shortest possible time.”

IRNA also reported that some members of Iran’s Parliament chanted “Death to America,” “Death to the hypocrite” and “Death to the seditionist” after the statement was read out loud.

In a Newsweek report from Nov. 8, citing CNN’s reporting on the open letter, Newsweek erroneously wrote that “Iran Votes to Execute Protesters,” without citing any additional reporting to support the claim.

On Tuesday, Newsweek issued a correction, writing, “This article and headline were updated to remove the reference to the Iranian Parliament voting for death sentences. A majority of the parliament supported a letter to the judiciary calling for harsh punishments of protesters, which could include the death penalty.”

On Sunday, Iran’s judiciary issued its first known death sentence connected to the recent protests, according to the judiciary’s Mizan news agency, which added that the ruling is preliminary and can be appealed. One other death sentence was reported Tuesday by Iran’s Tasnim News.

Afshin Marashi, professor of modern Iranian history at the University of Oklahoma, told NBC News over email that he had not seen any information to support that claim that 15,000 protesters had been sentenced to death, but explained why such a rumor might spread.

“In a situation where information is hard to confirm, rumors can spread rapidly,” Marashi wrote, adding that “the rumor seems to be based on public discussion that took place in the Iranian Majles (parliament) a week or so ago. There was a call by a large number of IRI MPs to impose severe punishment on the protestors.”

Marashi noted that there is precedent for mass execution in Iran, which he said could help fuel the claim of widespread death sentences for protesters.

“In 1988 thousands of political prisoners were executed by orders of Ayatollah Khomeini within the span of a few months,” he said. “The rumors of a new round of mass executions is likely fueled by memories of what happened in 1988.”

This story originally appeared on NBCNews.com.

This article was originally published on TODAY.com