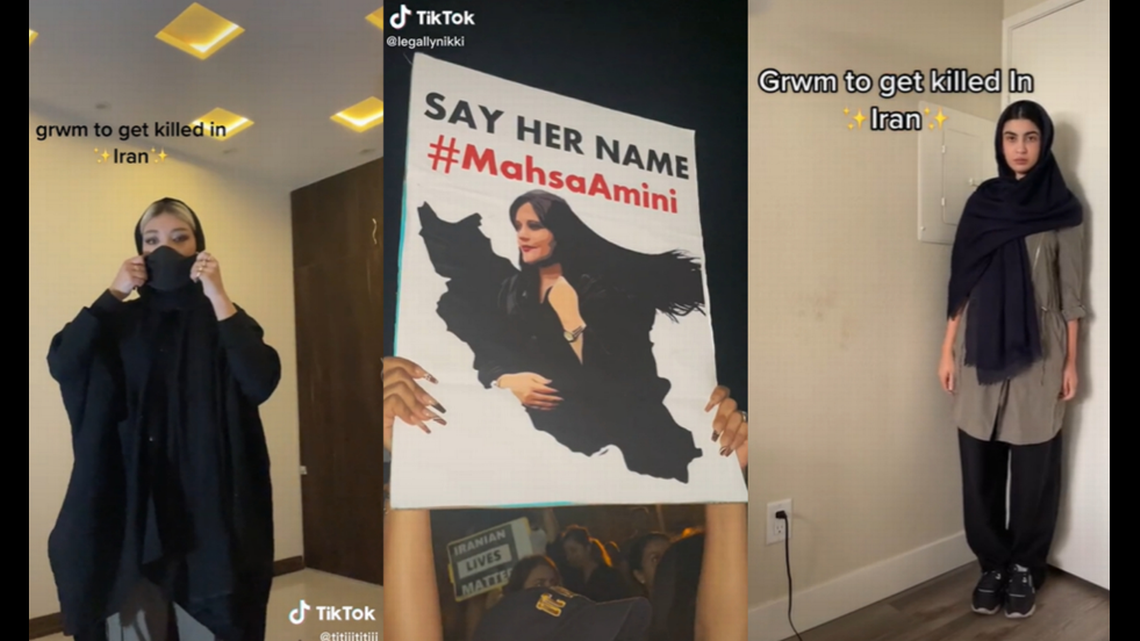 The internet has begun to go dark in Iran after days of unrelenting civil unrest, but the world is still watching on TikTok.

Protests following the death of 22-year-old Mahsa Amini, a woman who died in the custody of Iran’s morality police, have transcended the streets and spread to social media. Now, videos of Iranian women and their supporters are getting millions of views on online.

Many TikTok users are up to date on the situation in Iran, but there is another group advocates are hoping to reach: the people who are still asking, “What’s going on?”

Why people are watching

Amini, a Kurdish woman visiting Tehran, was detained by the morality police for not abiding by dress code rules, according to The Associated Press. Amini collapsed in the custody of the police and was taken to a hospital, where she spent three days comatose before she died.

While officials reported that Amini had a heart attack after being taken into custody on Sept. 13, the woman’s family says she has no history of heart disease and has accused the police of beating their daughter, McClatchy News reported.

Her death triggered a fervent uprising against the restrictions women face in the country seen online and through on-the-ground journalism. Amnesty International reported on Sept. 23 that at least 30 people, including four children, have died, and the Islamic Republic of Iran Broadcasting reports that at least 35 people have died, according to CNN.

Iran’s internet has since been disabled, and much of the country is facing widespread blackouts, CNN reported. Officials in the U.S. assume this is to inhibit protesters from sharing media of the uprising, they told the outlet.

But the videos and opinions shared by Iranians prior to the blackouts aren’t going unseen. Viewers around the world are peering — and weighing — in.

Millions of eyes on Iran

A Persian TikToker known as Nika took to TikTok days after Amini was killed and caught the attention of over 20 million people with her video, “Get ready with me to get killed in Iran.”

Nika told her viewers that she lives in the United States, but she wanted to make the video a message considering the protests in Iran.

“I’m Iranian and I live in Iran. Sometimes we have internet but so weak. Everything is scary in this country. Thanks for being our voice,” one person wrote on her video.

The “Get Ready With Me” trend on TikTok is popular among influencers or lifestyle TikTokers who show themselves going to the gym, grabbing coffee in the morning and putting on a cute outfit. In Nika’s, she fights back tears as she puts on a long coat and “improperly” wears a hijab in solidarity with Iranian women.

Nika explained in another video the proper and improper ways to wear a hijab.

The “Get Ready With Me” trend has picked up as more Iranians and supporters overseas are dressing on TikTok in solidarity.

Some creators are even luring viewers into the conversation by starting videos with U.S.-based drama that Americans might be more prone to pay attention to. When the viewer clicks, the creator switches the conversation and educates people about the Iranian protests.

“Please be our voice, last night a 20 yr old girl got killed by 6 bullets just because she wanted to join the protest against the murdering of Mahsa,” one TikToker who participated in the trend wrote.

The woman she’s talking about is 20-year-old Hadis Najafi, who was filmed tying up her hair and stepping into a protest before she was killed, Iran Wire reported.

Iranian journalist Masih Alinejad reported that the young woman had been shot in the chest, face and neck by Islamic Republic security forces.

“She was only 20 years old,” Hadis’ sister told Alinejad, Iran Wire reported. “Her heart was broken for Mahsa Amini. She said she would not stay silent. They killed her with six bullets.”

Staying in the spotlight

“The Iranian government has cut off access to the Internet for most of its 80 million citizens to prevent them — and the world — from watching its violent crackdown on peaceful protesters,” U.S. Secretary of State Antony Blinken told CNN.

Aside from newcomers on TikTok asking Iranians and supporters what is going on, their next question remains just as important to the movement: “What can we do?”

For many on TikTok, the answer is the same. Post about it. Share the videos. Talk about it.

“Americans are watching, we are just upset, most of us are using our voice,” one viewer commented on a video about Hadis. “Keep fighting sisters.”

“Please help us, they are killing us,” one Iranian woman wrote in her video. “We need your help and please be our voices because we don’t have any. We are so young, don’t let us die.”

Why are protesters in Iran blocking streets and burning their hijabs? What to know

What issues are most important to voters as midterm elections loom? What new poll finds