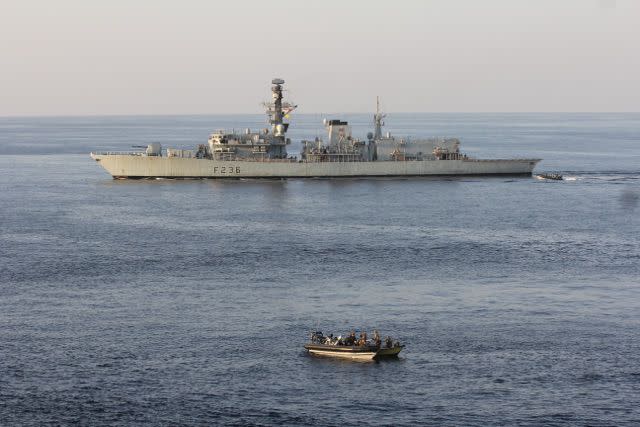 LONDON — A Royal Navy frigate intercepted speedboats carrying missiles and parts off the coast of Iran on two separate occasions earlier this year, the Ministry of Defence announced July 7.

It’s the first time a British warship has interdicted vessels carrying such sophisticated weapons from Iran, the MoD said in a statement.

Missiles and components being smuggled by the Iranians to equip Houthi rebels fighting Saudi-supported government forces in Yemen have been intercepted by the U.S. Navy on several occasions over the last few years.

The American destroyer Gridley supported the British effort in February, deploying a Sikorsky Seahawk helicopter to provide overwatch during the operation.

The incidents have not been previously reported by the British.

The missiles were being carried on speedboats in international waters south of Iran when a Leonardo Wildcat helicopter from the Type 23 frigate HMS Montrose spotted the vessels departing the Iranian coast.

The warship was conducting routine operations when the weapons were intercepted.

Analysis of the weapons by a team in the U.K. showed the shipment comprised multiple rocket engines for the Iranian-produced 351 land attack cruise missile and a batch of Iranian 358 anti-air missiles.

The engine for the cruise missile is an unlicensed and pirated version of a Czech-designed power unit.

The weapon type is regularly used by the Houthis to strike oil refineries and other infrastructure targets in Saudi Arabia and was also the type of weapon used to attack Abu Dhabi on Jan. 17.