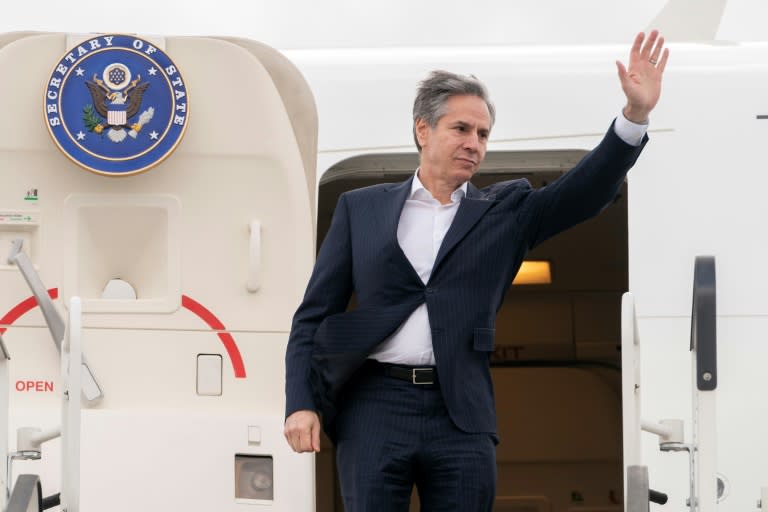 The United States and Israel “see eye-to-eye” on preventing Iran from getting an atom bomb, the US top diplomat said Sunday, ahead of talks in the Jewish state with Arab foreign ministers sceptical of a nuclear pact with Tehran.

US Secretary of State Antony Blinken was meeting top Israeli officials in Jerusalem as signals mount that the tattered 2015 landmark deal Tehran signed with major powers will soon be restored.

Israel fiercely opposed the initial accord, which promised its enemy Iran sanctions relief in return for curbs on its nuclear programme, and has said that a revived agreement will not do nearly enough to curb the Iranian threat.

Speaking alongside his Israeli counterpart Yair Lapid, Blinken said the US believes restoring the agreement was “the best way to put Iran’s programme back in the box that it was in but has escaped” after the US withdrew from the deal under former president Donald Trump in 2018.

Despite long-standing disagreements with Israel over the nuclear deal, known as the Joint Comprehensive Plan of Action, Blinken stressed that “when it comes to the most important element, we see eye-to-eye”.

“We are both committed, both determined, that Iran will never acquire a nuclear weapon.”

Iran insists its nuclear programme is for civilian use only.

Lapid said Israel had “disagreements” with Washington about the Iranian nuclear issue, which it was airing with its key ally in “open and honest dialogue”.

“Israel will do anything we believe is needed to stop the Iranian nuclear programme. Anything,” Lapid said.

“From our point of view, the Iranian threat is not theoretical. The Iranians want to destroy Israel. They will not succeed. We will not let them.”

Blinken and Lapid will both attend a Sunday-Monday summit in Israel’s Negev desert with foreign ministers from Egypt, Bahrain, the United Arab Emirates and Morocco.

The JCPOA has long been a source of concern for US allies in the Middle East, who see Iran as a menace.

Uzi Rabi, head of the Moshe Dayan Center for Middle Eastern Studies at Tel Aviv University, told AFP that the Negev summit was in part aimed at sending a message — to Tehran and Washington — as the Iran talks approach a possible conclusion.

“The most important thing is that Iran should understand that there is a kind of united front against it,” Rabi said.

“The most important message to be delivered is that there are many in the Middle East who are not satisfied with US performance regarding Iran.”

UAE, Bahrain and Morocco established full ties with Israel under Trump-brokered deals. Egypt had in 1979 become the first Arab country to establish relations with the Jewish state.

Iran has been engaged for months in talks in Vienna to revive the accord with Britain, China, France, Germany and Russia directly. The United States has been taking part indirectly in the negotiations.

The European Union’s foreign policy chief said at the weekend that a deal with Iran will likely be renewed “in a matter of days”.

Palestinians remain concerned that they are being forgotten in the US-backed push for Arab governments to boost relations with Israel and focus on Iran as their principal concern.

The Trump administration slashed support for the Palestinians and closed the US consulate in Jerusalem dedicated to Palestinian relations.

Biden has promised to reopen the consulate, but a year into his administration this has not yet happened.

After Israel, Blinken will travel to Morocco and Algeria to talk about regional security and the disputed territory of Western Sahara, which has divided the two neighbours.

Also in Morocco, he will hold talks with the UAE’s Mohammed bin Zayed Al-Nahyan, who has become a major political force in the region.