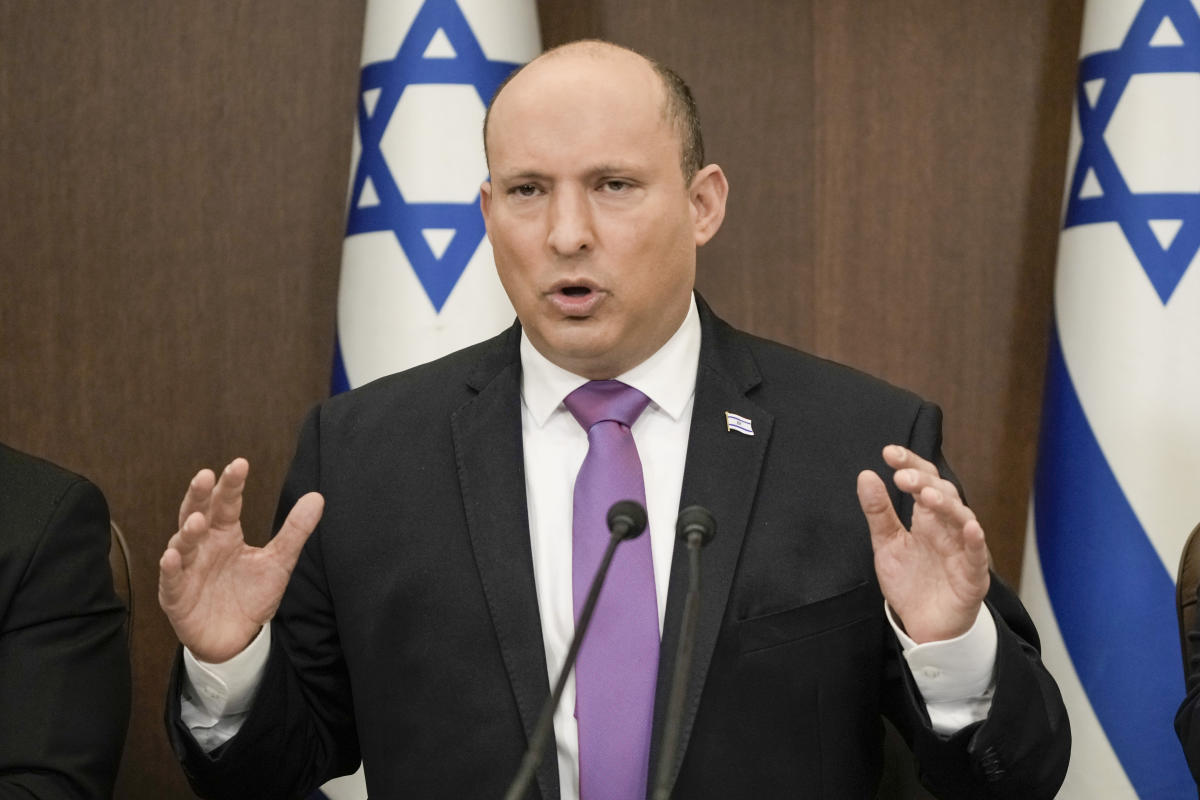 JERUSALEM (AP) — Israel’s prime minister on Sunday criticized an emerging deal over Iran’s nuclear program, saying it would be weaker than a previous agreement and would create a “more violent, more volatile Middle East.”

World powers have been negotiating in Vienna in a bid to revive the 2015 nuclear deal, which was left in tatters after the Trump administration, goaded by Israel, withdrew.

The original deal granted Iran relief from crippling economic sanctions in exchange for curbs on its nuclear program. Israel vehemently opposed that accord and has urged negotiators to take a hard line against Iran in the current round of talks.

In a speech to Jewish American leaders Sunday, Israeli Prime Minister Naftali Bennett warned that Iran has used the interim period to march ahead with its enrichment of uranium to levels approaching weapons grade.

He also noted the 10-year limits on enrichment and other key aspects of Iran’s nuclear program in the original deal are set to be lifted in 2025 — just two and a half years from now.

That “leaves Iran with a fast track to military-grade enrichment,” Bennett told the Conference of Presidents of Major American Jewish Organizations.

In the meantime, he said that lifting sanctions right away will deliver billions of dollars to Iran to spend on hostile proxy groups along Israel’s borders.

“For Israel and all the stability-seeking forces in the Middle East — the emerging deal as it seems is highly likely to create a more violent, more volatile Middle East,” he said.

He repeated his pledge that Israel will not allow Iran to become a threshold state and said Israel would not be bound by a new deal. “We have a clear and un-negotiable red line: Israel will always maintain its freedom of action to defend itself,” he said.

Bennett delivered a similar message earlier in the day during the weekly meeting of his Cabinet.

Israel considers Iran to be its greatest enemy. It strongly opposed the 2015 deal and has watched with trepidation as the current talks have carried on.

It says it wants an improved deal that places tighter restrictions on Iran’s nuclear program and addresses Iran’s long-range missile program and its support for hostile proxies along Israel’s borders, like the Lebanese militant Hezbollah.

Israel also insisted that the negotiations must be accompanied by a “credible” military threat to ensure that Iran does not delay indefinitely.

Under the strong encouragement of former Israeli Prime Minister Benjamin Netanyahu, President Donald Trump withdrew from the original deal in 2018, causing it to unravel. Since then, Iran has stepped up its nuclear activities — amassing a stockpile of highly enriched uranium that goes well beyond the bounds of the accord.

Despite Israel’s support for Trump’s withdrawal, prominent voices in the country have said in retrospect that the move was a blunder.

In Iran, meanwhile, the Iranian parliament’s news agency, ICANA, reported that 250 lawmakers in a statement urged President Ebrahim Raisi and his negotiating team to obtain guarantees from the U.S. and the three other European counties that they won’t withdraw from the deal after it is renegotiated.

Iran’s hard-line dominated parliament has the power to approve or reject any proposed agreement between Iran and the other parties in Vienna.

The United States has participated in the current talks indirectly because of its withdrawal from the original deal. President Joe Biden has signaled that he wants to rejoin the deal.

Under Trump, the U.S. re-imposed heavy sanctions on the Islamic Republic. Tehran has responded by increasing the purity and amounts of uranium it enriches and stockpiles, in breach of the accord — formally known as the Joint Comprehensive Plan of Action, or JCPOA.

Iran long has insisted its nuclear program is peaceful. But the country’s steps away from its obligations under the accord have alarmed its archenemy Israel and world powers.

Tehran has started enriching uranium up to 60% purity — a short technical step from the 90% needed to make an atomic bomb, and spinning far more advanced centrifuges than those permitted under the deal.

German Chancellor Olaf Scholz told participants at the annual Munich Security Conference on Saturday that the talks have come a long way over the past 10 months and “all elements for a conclusion of the negotiations are on the table.” But he also criticized Iran for stepping up its enrichment and restricting inspections by monitors from the U.N. nuclear agency.

Iran’s foreign minister said that it’s up to Western countries to show flexibility and “the ball is now in their court.”