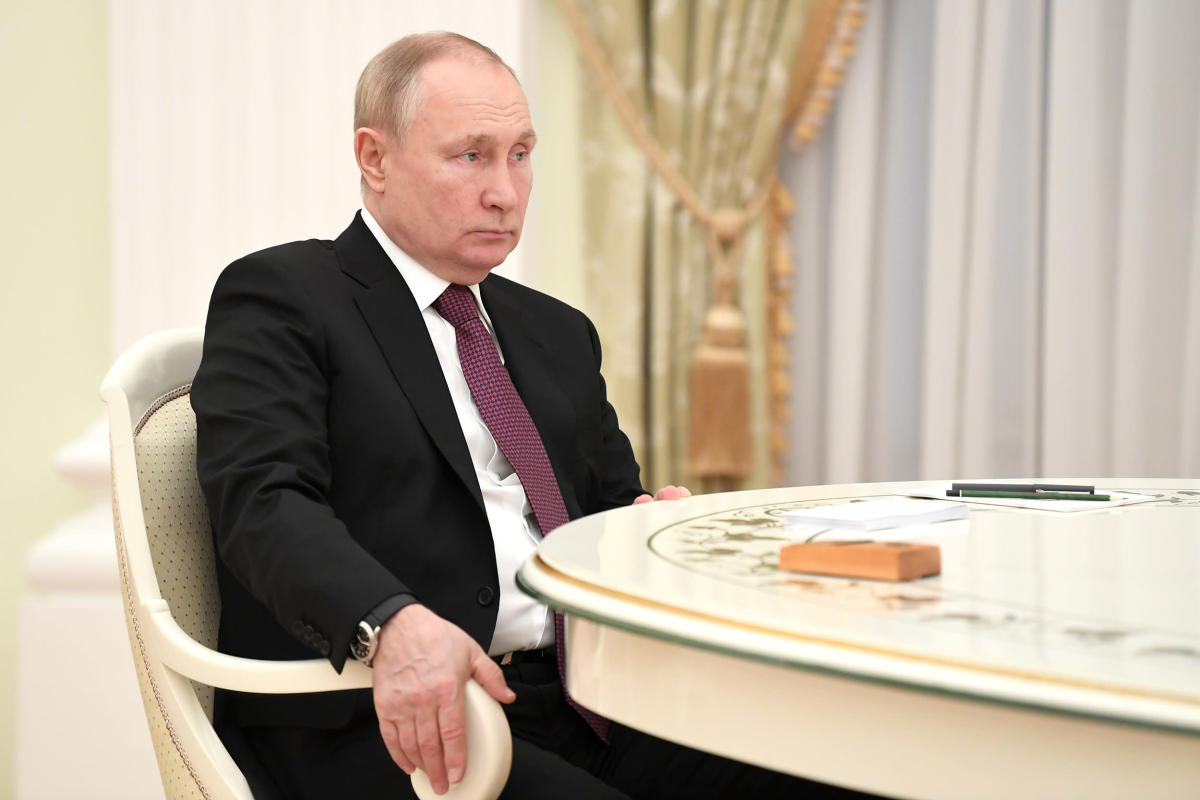 As part of an effort to revive the international nuclear deal with Iran, Russia has discussed a possible interim agreement with Iran in recent weeks that would involve limited sanctions relief in return for reimposing some restrictions on Tehran’s nuclear program, according to two U.S. officials, one Congressional official, one former U.S. official and four other people familiar with the discussions.

The sources said the U.S. is aware of Russia’s proposal to Iran, which comes as concern grows within the Biden administration that time is running out on negotiations between Iran and world powers over a full return to the 2015 nuclear deal, called the Join Comprehensive Plan of Action or JCPOA. The Trump administration withdrew the U.S. from the deal in 2018, and Iran is reportedly closer than ever to attaining the ability to manufacture nuclear weapons.

While the officials and people familiar with the discussions said Russia’s talks with Iran about an interim deal have been conducted with the knowledge of the U.S., senior Biden administration officials distanced the U.S. from the Russian effort.

Iran has so far rejected the proposal presented by Russia, the officials and other people familiar with the discussions said. The Iran Permanent Mission to the United Nations said on Friday that Tehran does not want an interim deal, and declined to discuss specifics of the Russian proposal.

Any new agreement separate from the JCPOA could trigger a review by Congress.

As such, if an understanding were to be reached on an interim Russian proposal, the U.S. and other governments likely would portray it as a first step toward a full return to the 2015 accord, and not as a new or separate agreement, the sources said.

A senior Biden administration official said an interim “arrangement” is not under serious discussion.

“Though we cannot speak for any discussions that may have taken place between Russia and Iran, at this stage we are certain that no such interim arrangement is being seriously discussed,” the official said. “Regarding an interim deal, we will not negotiate in the press or comment on specific claims about the negotiations. Our timeline is based on a technical assessment of Iran’s nuclear progress rather than a temporal clock.”

The Russian government did not immediately respond to a request for comment.

On Friday, Secretary of State Antony Blinken urged Russia to use its influence on Iran. “If a deal is not reached in the next few weeks Iran’s ongoing nuclear advances will make it impossible to return to the JCPOA, but right now there’s still a window, a brief one,” Blinken said after meeting with Russian Foreign Minister Sergey Lavrov in Geneva. “Russia shares our sense of urgency, the need to see if we can come back into mutual compliance in the weeks ahead, and we hope that Russia will use the influence that it has and relationship that it has with Iran to impress upon Iran that sense of urgency.”

Under one draft interim agreement that sources said Russia presented to Iran, Tehran would be required to stop enriching uranium up to 60 percent purity and dispose of its current stockpile, possibly by exporting it to Russia, along with other restrictions. In exchange, the Iranian government would receive access to billions of dollars in oil revenues frozen in foreign bank accounts, including in South Korea, the sources said.

The discussions between Russia and Iran have taken place on the sidelines of formal talks in Vienna between Iran and world powers that are aimed at all parties returning to the 2015 nuclear deal, according to the two U.S. officials, one Congressional official, according to the sources.

Negotiations in Vienna have been complicated by Iran’s insistence that it will not hold direct talks with U.S. officials. Instead, the Americans have had to communicate with their Iranian counterparts via European diplomats. The Biden administration has said Iran’s stance has slowed down the discussions and it has urged Tehran to reconsider its position.

“We would be in favor of speaking directly with the Iranian delegation and believe it would be more productive, however, Iran has not agreed,” the senior administration official said.

Iran’s mission to the United Nations said Friday that Iran remains opposed to holding direct talks with the U.S. in Vienna, and that Iran’s goals of sanctions relief and a guaranteed U.S. return to the 2015 agreement “would not be achieved under an interim deal, and therefore any such proposal must be rejected.”

“Iran seeks a reliable but also durable agreement that is consistent with the promises made in the JCPOA, and any agreement that does not meet these two criteria is not on the agenda for us,” the Permanent Mission said in a statement.

U.S. officials say major differences remain in negotiations on returning to the 2015 nuclear deal and that there’s little time left before Iran’s nuclear program advances to a point where Tehran would have enough fissile material to build an atomic bomb. An interim deal could slow down Iran’s nuclear program while giving negotiators more time to broker a full return to the 2015 agreement.

The U.S. negotiating team in Vienna recently changed, with one key member, Richard Nephew, leaving to return to a different role at the State Department. Two people familiar with the matter said Nephew and U.S. Special Representative for Iran, Robert Malley, had a disagreement over the direction of the talks.

A State Department official said in a statement, “Richard Nephew made important contributions to the team, where he served for nearly a year. He remains with the Department of State.”

An interim nuclear agreement with Iran could be a difficult sell in Washington and Tehran.

Some U.S. lawmakers who opposed or had reservations about the 2015 nuclear deal are increasingly concerned about the possibility of an interim deal because while it would impose more limitations on Iran’s nuclear program than are currently in place, it would lack the stricter restrictions in the 2015 agreement, congressional aides said.

Should the White House insist an interim “arrangement” was merely the first step towards renewing the 2015 deal, Republicans and some moderate Democrats likely would argue that the administration is legally required to submit it to Congress for review. Under a law passed after the 2015 Iran nuclear deal, any new nuclear agreement must be reviewed and approved by Congress before it can be implemented. The law, the Iran Nuclear Agreement Review Act, gives Congress 60 days to do so.

Rep. Michael McCaul of Texas, the ranking Republican on the House Foreign Affairs Committee, and other GOP lawmakers wrote a letter last year to the administration arguing that even a return to the 2015 nuclear deal would require congressional approval.

One person familiar with the Russian proposal described it as “an interim step towards a full return to compliance” with the 2015 deal.

“It’s not a substitute,” this person said. “In that sense, it’s not a new agreement. It’s an understanding to go part of the way there.”

For Iran, an interim deal with some limits on its nuclear activity could diminish Tehran’s leverage in broader negotiations, experts and former officials said. An interim arrangement with only limited sanctions relief also could be politically damaging to Iran’s new hardline government, which has portrayed the previous Iranian president, Hassan Rouhani, as too ready to compromise with the West and failing to deliver economic benefits to Iran.

In the years since former President Donald Trump announced the U.S. withdrawal from the 2015 nuclear deal and reimposed sanctions, Tehran has steadily expanded its nuclear program and violated restrictions on uranium enrichment and other nuclear work under the agreement. When the 2015 nuclear deal went into effect, Iran’s so-called “breakout time” — how much time it needed to have a bomb’s worth of fissile material — was greater than one year. Now it’s estimated at about three weeks, according to an assessment from the Arms Control Association, a nonpartisan organization that supported the 2015 deal. Other nuclear experts say it could be less than three weeks.

The IAEA is due to issue its next report on Iran’s program in February, and Western officials fear it will show yet more advances in Tehran’s nuclear program.

Iran says it is not developing nuclear weapons and has no plans to do so.

In addition to requiring Iran to stop enriching uranium up to 60 percent, the interim proposal Russia discussed with Iran would also put restrictions on enrichment at 20 percent and Iran’s advanced centrifuges, the U.S. official, Congressional official and four people familiar with the proposal said. The proposal had a six-month duration, with the option to extend after it expired, the sources said.

One person familiar with the proposal said it stipulates Iran would receive additional sanctions relief for each extension and some $10 billion in sanctions relief from unfrozen assets in South Korea, Japan and Iraq.

The idea of an interim agreement was discussed after President Joe Biden took office, but administration officials decided instead to focus on trying to negotiate a full return to the 2015 deal.

That Russia is engaging in a diplomatic effort to help the U.S. seems directly at odds with the ongoing crisis Moscow has created on the border with Ukraine. With more than 100,000 Russian troops now staged around Ukraine, Biden administration officials have been consumed with diplomacy aimed at convincing Russian President Vladimir Putin not to invade.

But U.S. officials said in the past Moscow has cooperated with Washington during similar times of military tension, including close cooperation between Russia’s main security agency, FSB, and the FBI on the Boston Marathon bombing investigation as Russia was threatening to invade Crimea, and ultimately did.

Continuation of strategic cooperation with Russia

Continuation of strategic cooperation with Russia