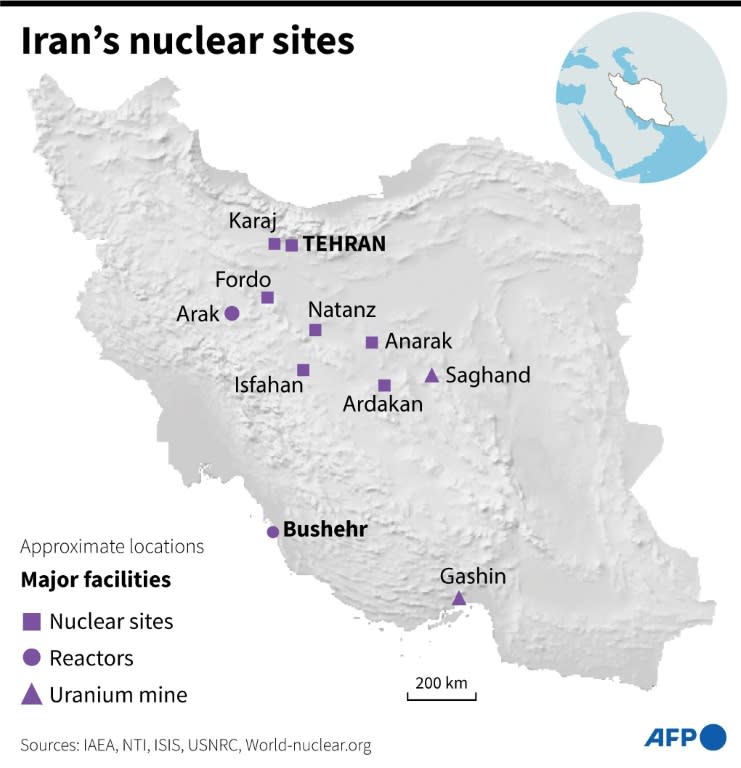 With talks to restore the 2015 nuclear deal between Iran and world powers scheduled to resume in Vienna on Monday, we look at the sanctions and brinkmanship since the United States pulled out of the pact in May 2018.

Here is a timeline:

President Donald Trump walks away from the deal negotiated between Iran and the five permanent members of the UN Security Council — Britain, China, France, Russia and the US — plus Germany on May 8, 2018.

“We cannot prevent an Iranian nuclear bomb under the decaying and rotten structure of the current agreement,” he says.

Later that year, Washington reimposes sanctions on Iran and companies with ties to it, badly hitting Iran’s vital oil sector and central bank.

Major international firms halt activities in Iran as the US bans other nations from buying Iranian crude.

In May 2019, Iran takes its first step away from the deal, hoping to pressure Europe into helping it circumvent the sanctions.

Trump hits back by sanctioning Iran’s steel and mining sectors.

In July, Tehran says it has exceeded the accord’s restrictions on both its enriched uranium reserves and enrichment levels.

In November, Tehran says its enrichment increased tenfold and that it has developed two new advanced centrifuges.

It then resumes enrichment at its Fordo plant.

Tensions between Washington and Tehran spiral after a US drone strike in Baghdad in January 2020 kills top Iranian commander Qasem Soleimani, sparking a tit-for-tat confrontation.

Iran announces its fifth step back, foregoing a limit on its number of centrifuges.

In February, Iran demands economic advantages from Europe in return for cancelling all, or part, of its rollback measures.

In March, European signatories say they have delivered medical goods to Iran under a mechanism established to bypass US sanctions.

On November 27, 2020, one of Iran’s top nuclear scientists Mohsen Fakhrizadeh is killed near Tehran in an attack that Iran blames on Israel.

With Trump in his last days in the White House and tensions spiralling, Tehran deals the accord a further blow on January 4 by saying it has started enriching uranium at Fordo.

The IAEA in February says Iran has started producing uranium metal, which can be used in nuclear weapons.

It is also “deeply concerned” by the possible presence of nuclear material at an undeclared site as Iran restricts site inspections.

On April 7, with President Joe Biden in the White House, talks on rescuing the accord start in Vienna.

But nine days later, Iran says it will start enriching uranium up to 60 percent after an attack on its Natanz plant which it blames on Israel.

But on August 5, he says it is again open to negotiations as experts warn nuclear work is continuing apace and advancing to dangerous levels.

On October 13, Washington raises the spectre of a military option as Europe presses Iran to rejoin the talks suspended since June.

On October 27, after a meeting in Brussels, Iran says it is ready to resume talks, with the US taking part indirectly. They agree to restart negotiations in Vienna on November 29.

Iran has increased its stockpile of highly enriched uranium many times in excess of the limit laid down in the 2015 agreement, the IAEA says on November 17.

After a mission to Tehran, IAEA head Rafael Grossi says on November 24: “In terms of the substance… we were not able to make progress.”

Iran accuses the UN’s Vienna-based nuclear agency of bowing to pressure from its Western financiers to “discriminate” against the Islamic republic.