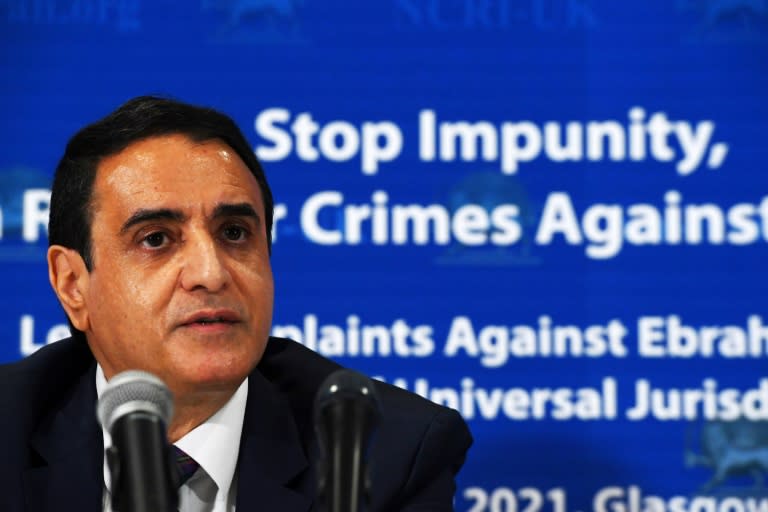 An Iranian opposition group has filed a complaint with Scottish police for human rights abuses and genocide allegedly committed by Iran’s President Ebrahim Raisi, its members said in Glasgow on Wednesday.

Hossein Abedini, a member of the National Council of Resistance of Iran (NCRI) coalition of opposition parties, said at a press conference that Raisi had to be held accountable for taking part in the massacre of around 30,000 political prisoners in 1988.

“Raisi should be held accountable for genocide and the many crimes against humanity that he committed as a senior official of the Iranian regime,” Abedini told reporters.

“The international community must act to investigate the 1988 massacre and Raisi’s role in it.”

The NCRI called for Raisi, a hardline cleric elected to office in August, to be arrested if he travels to Glasgow to attend the UN climate change summit from October 31.

“He shouldn’t be allowed to set foot in countries outside Iran and this is why a formal request has been made with Police Scotland to arrest Raisi for crimes against humanity if he decides to attend COP 26 in Glasgow,” Abedini said.

A similar complaint has been filed in England, which has a separate legal system.

The complaints relate to Raisi’s role as a judge during mass executions in 1988, when the Islamic republic was solidifying control.

Ayatollah Ruhollah Khomeini, Iran’s Supreme Leader at the time, issued a fatwa ordering the execution of all supporters of the opposition People’s Mojahedin of Iran (PMOI), which Tehran considers a “terrorist group”.

Special death commissions were created to implement the order, according to the NCRI.

Struan Stevenson, a Scottish former European parliament member, said he had sent a letter to Police Scotland’s Chief Constable Iain Livingstone on behalf of the NCRI, asking for a criminal investigation into the accusations of genocide and crimes against humanity against Raisi.

“In a covering letter to Chief Constable Livingstone, the plaintiffs state that they, or their relatives or cellmates, were ‘subjected to the crime of torture and extra-judicial executions on a large scale’,” Stevenson said.

“In their testimonies, they describe how in the summer of 1988, they were taken to Gohardasht Prison, west of Tehran, where, in a three-minute hearing, they were confronted by Raisi, in his role as a public prosecutor, and asked if they continued to support the PMOI.”

Stevenson said Raisi, a former head of the Iranian judiciary, is known widely as “The Butcher of Tehran” and on the US sanctions list for serial human rights violations.

Amnesty International and Human Rights Watch have both called for his indictment for human rights violations and crimes against humanity.