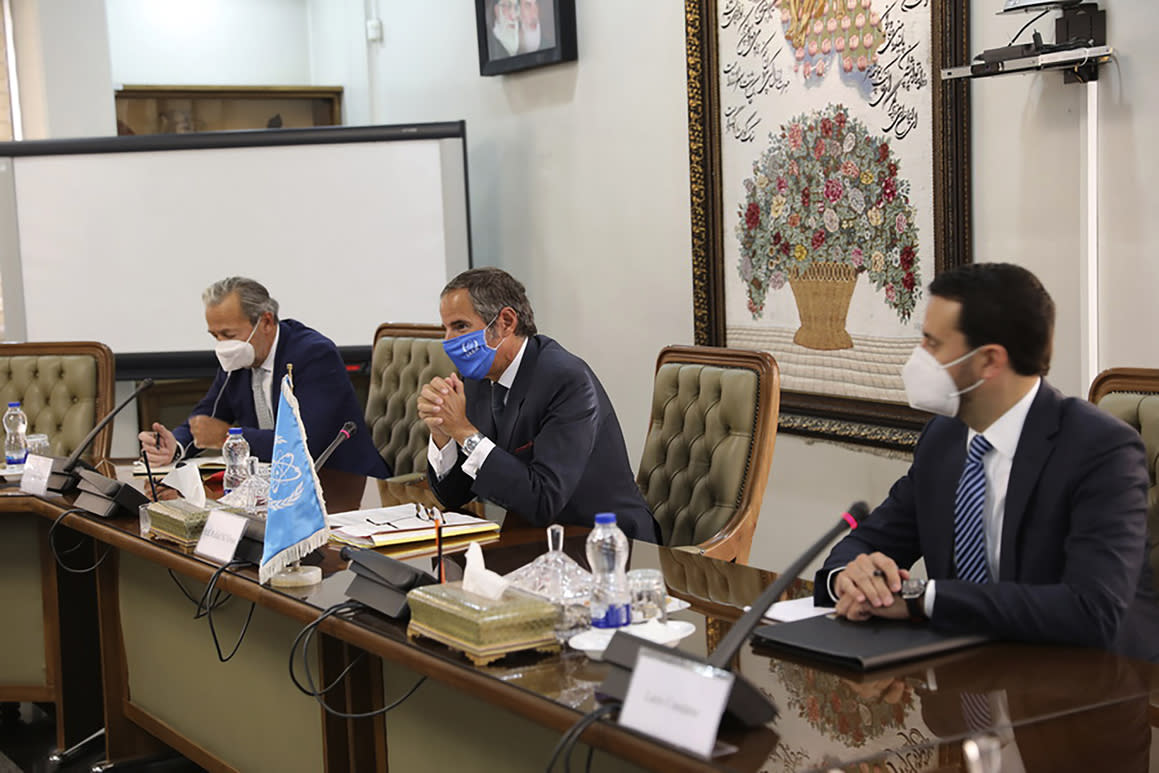 The announcement by Mohammad Eslami of the Atomic Energy Organization of Iran after a meeting he held with the director-general of the International Atomic Energy Agency, Rafael Grossi, in Tehran still leaves the watchdog in the same position it has faced since February, however.

Tehran holds all recordings at its sites as negotiations over the U.S. and Iran returning to the 2015 nuclear deal remain stalled in Vienna. Meanwhile, Iran is now enriching small amounts of uranium to its closest-ever levels to weapons-grade purity as its stockpile continues to grow.

“I am glad to say that today were able to have a very constructive result, which has to do with the continuity of the operation of the agency’s equipment here,” Grossi said. It “is indispensable for us to provide the necessary guarantee and information to the IAEA and to the world that everything is in order.”

Eslami described the negotiations between Iran and the Vienna-based IAEA as “sheerly technical” without any room for politics. He said Grossi would return to Iran soon to talk with officials, without elaborating. Also left unsaid was whether Iran would hand over copies of the older recordings, which Tehran had threatened previously to destroy.

“The memory cards are sealed and kept in Iran according to the routine,” Eslami said. ”New memory cards will be installed in cameras. That is a routine and natural trend in the agency’s monitoring system.”

A joint statement released by the IAEA and Iran confirmed the understanding, saying only that “the way and the timing are agreed by the two sides.”

The announcement could buy time for Iran ahead of an IAEA board meeting this week in which Western powers had been arguing for Tehran to be censured over its lack of cooperation with international inspectors. Eslami said Iran would take part in that meeting and its negotiations with the IAEA would continue there.

The IAEA told member states in its confidential quarterly report last week that its verification and monitoring activities have been “seriously undermined” since February by Iran’s refusal to let inspectors access their monitoring equipment.

The IAEA said certain monitoring and surveillance equipment cannot be left for more than three months without being serviced. It was provided with access this month to four surveillance cameras installed at one site, but one of the cameras had been destroyed and a second had been severely damaged, the agency said.

Mikhail Ulyanov, the Russian ambassador to the IAEA, praised the agreement on Twitter, calling it “technical but very important.”

“It is no less important for Iran to rebuff groundless speculations against it,” Ulyanov wrote.

President Joe Biden has said he’s willing to re-enter the accord, but so far, indirect talks have yet to see success. In the meantime, Iran elected Ebrahim Raisi, a hard-line protégé of Supreme Leader Ayatollah Ali Khamenei, as president. Raisi also has said he wants Iran to regain the benefits of the accord, though Tehran in general has struck a tougher pose since his victory.

In Israel, Israeli Prime Minister Nafatli Bennett urged world powers to not “fall into the trap of Iranian deception that will lead to additional concessions” over the impasse. Israel, widely believed to possess nuclear weapons, has long accused Iran of seeking an atomic bomb. Tehran maintains its program is peaceful, though U.S. intelligence agencies and international inspectors believe the Islamic Republic pursued the bomb in an organized program up until 2003.

The premier added: “The Iranian nuclear program is at the most advanced point ever. … We must deal with this project.”