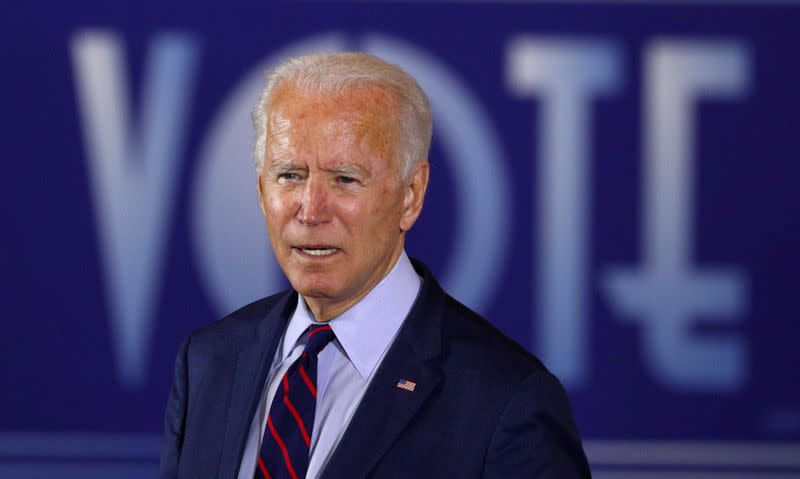 WASHINGTON/MEXICO CITY/LONDON (Reuters) – Democratic U.S. presidential hopeful Joe Biden’s promised return to diplomacy with OPEC-members Iran and Venezuela could cut a path for a return of their oil exports should he win, but not before many months at least of verifications, talks and deal-making.

The timing of a potential resumption of shipments is crucial to world oil markets: U.S. President Donald Trump’s unilateral sanctions on the two countries since taking office in 2017 have blocked up to 3 million barrels per day (bpd), or 3% of world supply. Iran has taken the biggest hit, with exports shrinking by around 2 million bpd to around 500,000 bpd.

The sanctions fit squarely with Trump’s policy of energy dominance to boost oil exports from the United States, which in 2018 became the world’s largest producer of crude.

A broad change in Iran policy would likely come first, but the soonest that full, sustainable oil exports could return from that country is about a year from now, said Richard Nephew, the lead sanctions expert on the U.S. team that helped land a deal with five other world powers on Tehran’s nuclear program in 2015.

Trump withdrew the United States from that deal in 2018 over the objections of European and Asian counterparts. He argued the deal did not address Iran’s ballistic missiles program and militancy across the Middle East.

Biden, who was vice president under President Barack Obama when the 2015 deal was struck, has said he wants to offer Tehran a path back to diplomacy. If Iran commits to not acquiring a nuclear weapon, he would rejoin the deal and strengthen it.

Nephew, now a research scholar at Columbia University’s Center on Global Energy Policy, said a Biden administration would be unlikely to begin work on Iran until several months after the Jan. 20 inauguration. It would first be busy with the basic work of finalizing leadership teams and prioritizing policies, he said.

A deal would likely only occur only after Iran downgrades its supplies of enriched uranium, which have built up during the Trump administration. Down-blending takes time, and verification by U.N. inspectors could take at least several months. Organizing multilateral negotiations on a new Iran deal, and carrying it through would take additional time.

“This is going to wait,” Nephew said.

Bob McNally, a national security council energy expert under former President George W. Bush and president of the Rapidan Energy Group, predicted a return of Iran’s oil exports in the second half of next year.

European officials are eager for a renewed relationship with Iran if Biden wins, but have not attempted to engage with his campaign on the issue ahead of the election, fearing blowback from the Trump administration should Trump win, three EU diplomats said.

The Biden campaign did not comment on Iran about this story, but pointed to a Biden piece https://www.cnn.com/2020/09/13/opinions/smarter-way-to-be-tough-on-iran-joe-biden/index.html on CNN.com in September that said he would make an “unshakable commitment” to preventing Iran from acquiring a nuclear bomb.

Iran is not anticipating quick relief from sanctions that have slammed its economy, said the head of an oil trading firm in Tehran. A presidential election scheduled in Iran for June 18 would almost certainly delay talks on the issue.

“It will take a long time,” the source said.

Once the politics are resolved, large shipments could return quickly. Iran has accumulated about 100 million barrels of oil in floating storage and offshore tanks in countries like China, according to Iman Nasseri, managing director for the Middle East with consultancy FGE.

“Iranian oil can reach markets overnight,” he said. “Iran can rely on this export for months, while working to bring its production to previous levels.”

In the meantime, a Biden administration could be more lax in enforcing sanctions and award a new round of waivers, allowing a few countries to buy limited amounts of Iranian oil, said Ed Crooks, vice chairman, Americas for Wood Mackenzie. Trump axed the waiver program in 2019.

Biden shares Trump’s desire to see the replacement of Venezuelan President Nicolas Maduro, a socialist whose 2018 election was widely seen as fraudulent.

Biden would likely retain sanctions against Venezuela’s state oil company PDVSA in the near-term, according to Leopoldo Martinez, a strategist for Biden’s campaign on the Latino vote.

But the strategy would probably shift substantially under Biden, with more input from allies and trading partners on a path forward.

“We are not seeking to dismantle the sanction policy, but to apply sanctions in an intelligent way, helped by a multilateral effort and with specific goals to be achieved, mainly free, fair and credible elections,” Martinez said.

Sanctions could theoretically be lifted once those goals are achieved.

Meanwhile, a Biden administration would also push for humanitarian relief in Venezuela, where much of the population has suffered under sanctions on oil, the lifeblood of its economy, Martinez said.

Rapidan, McNally’s group, said in a note that humanitarian relief could include an easing of U.S. sanctions on Venezuelan imports of fuels like gasoline, but not a break on sanctions on petroleum exports.

Even in the event of a change of leadership that resulted in a lifting of sanctions, a quick return of Venezuela’s exports beyond about 1 million bpd, up from about 500,000 bpd currently, is unlikely for six months to a year, Rapidan said.

A lack of investment has left equipment and fields in Venezuela, which holds the largest oil reserves in the world, in a state of disrepair.

“That one is a much more distant scenario than Iran,” Columbia’s Nephew said about Venezuela. “I’m not sure we have the same ability to call the shots there.”