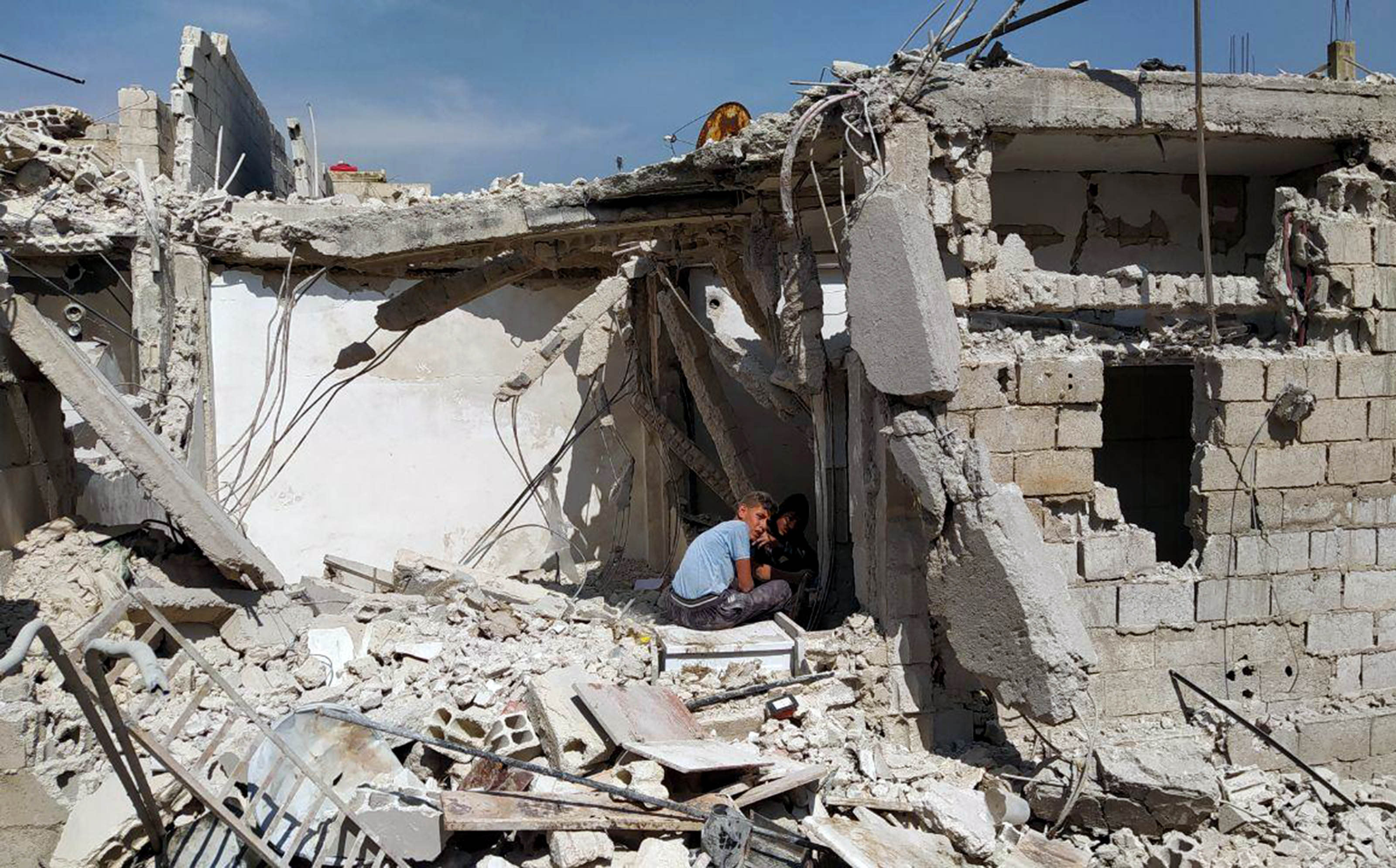 In this photo released by the Syrian official news agency SANA, boys sit amid the rubble of a house that according to the Syrian authorities was attacked by an Israeli airstrike, in the Damascus suburbs of Hajira, Syria, Monday, April 27, 2020. The Syrian military and state media said Monday that Israeli warplanes flying over Lebanon fired missiles toward areas near the Syrian capital of Damascus, killing three civilians. An opposition war monitor says four Iran-backed fighters were also killed. The military says Syrian air defenses shot some of the missiles down. The reports said the attack happened around dawn on Monday. (SANA via AP)

The military said Syrian air defenses shot down some of the missiles in the attack, which happened around dawn. The Britain-based Syrian Observatory for Human Rights, a group that tracks the Syrian civil war, said the missiles hit positions belonging to Iran and its regional proxies, killing four fighters and causing damage south of Damascus. It did not give the nationalities of the dead gunmen only saying that they were not Syrians nor members of Lebanon’s Hezbollah group.

The airstrike is the fourth in Syria in less than a month, despite the coronavirus pandemic gripping the region, and comes amid rising tensions between Israel and Lebanon’s militant Hezbollah group in Syria as well as along the Lebanon-Israel border.

The Syrian military statement, carried by state TV, gave no other details about the attack or what it targeted specifically. Syria’s state SANA news agency said shrapnel from the Israeli missiles hit homes in the Damascus suburbs of Hajira and Adlieh, killing three people there and wounding four. Both areas are close to the Sayyida Zeinab suburb that is home to a holy Shiite shrine and Iran-backed fighters have a presence there, according to opposition activists.

Israel did not comment on the Syrian report. In the past, Israel has acknowledged carrying out scores of airstrikes over the years, most aimed at alleged Iranian weapons shipments believed to be bound for Hezbollah. In recent months, Israeli officials have expressed concern that Hezbollah is trying to establish production facilities to make precision guided missiles.

Last week, an Israeli airstrike targeted Iranian and Iran-backed fighters in the desert near the historic central Syrian town of Palmyra. A Syrian opposition war monitoring group said the strike killed nine fighters, including six who were not Syrians.

Days earlier, an Israeli drone fired two missiles near an SUV carrying Hezbollah members in Syria, close to the border with Lebanon. No one was hurt in the attack.

Two days after the drone attack, Israel accused Hezbollah of “provocative” activity, including multiple attempts to breach the border along the Lebanese-Israeli frontier, and said it would complain to the U.N. Security Council.

On March 31, Israeli warplanes fired missiles on the Shayrat air base also in the central province of Homs.

Cultivation started in 5.5 hectares of greenhouses in Gorgan last year

Cultivation started in 5.5 hectares of greenhouses in Gorgan last year