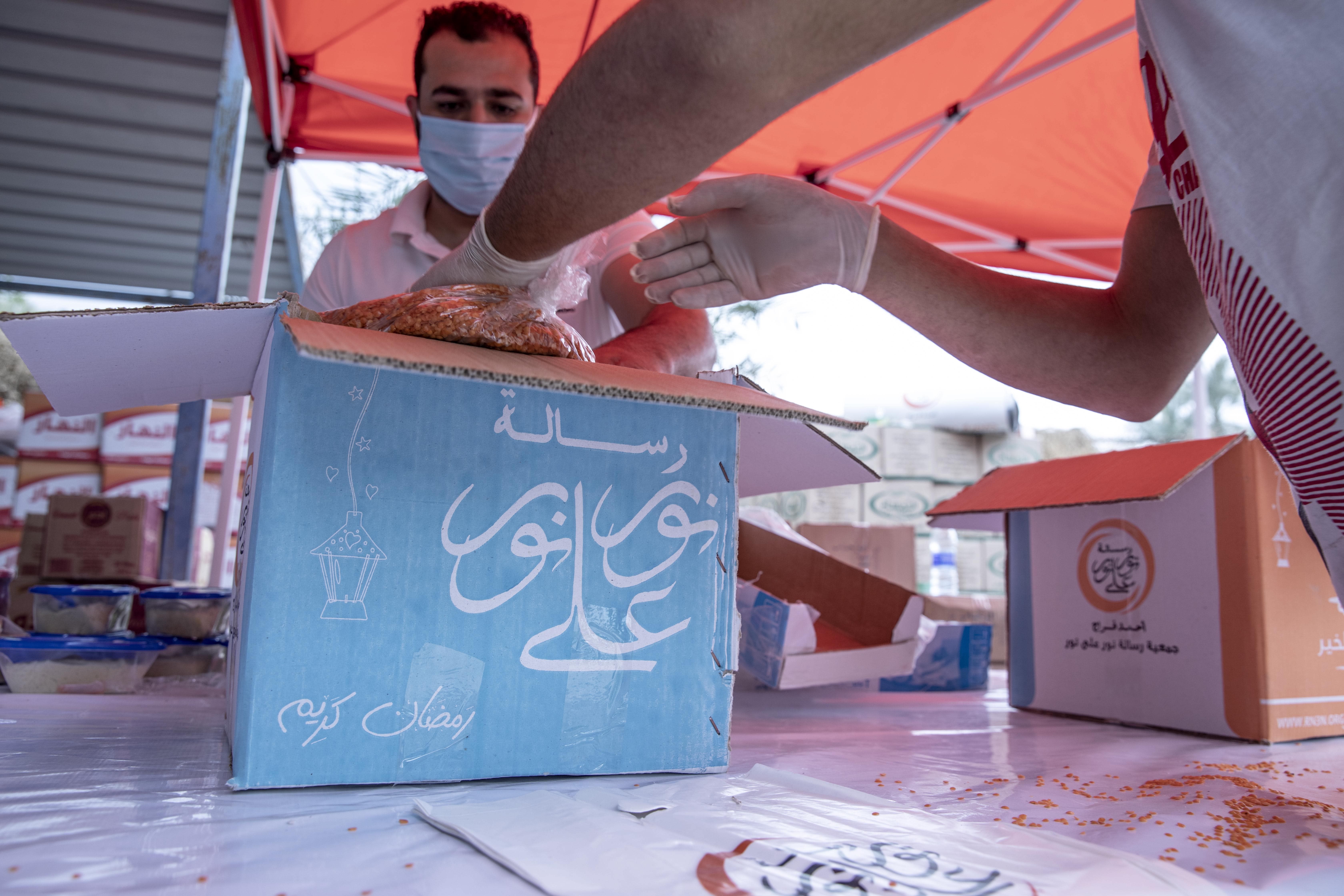 Non-governmental organization Resala Nour Ala Nour workers prepare cartons filled with food to distribute to people who have been greatly affected by the coronavirus outbreak, in Cairo, Egypt, Thursday, April 9, 2020. (AP Photo/Nariman El-Mofty)

DUBAI, United Arab Emirates (AP) — Iran’s supreme leader suggested Thursday that mass gatherings may be barred through the Muslim holy month of Ramadan amid the coronavirus pandemic. Meanwhile, Amnesty International said it believed at least 35 Iranian prisoners were killed by security forces amid rioting over the virus.

Supreme Leader Ayatollah Ali Khamenei made the comments in a televised address as Iran prepares to restart its economic activity while suffering one of the world’s worst outbreaks. He is also the highest-ranking official in the Muslim world to acknowledge the holy month of prayer and reflection will be disrupted by the virus and the COVID-19 illness it causes.

“We are going to be deprived of public gatherings of the month of Ramadan,” Khamenei said during a speech marking the birth of revered 9th century Shiite Imam Mahdi. “In the absence of these meetings, remember to heed your prayers and devotions in your lonesomeness.”

Ramadan is to begin in late April and last through most of May. Iranian public officials had not yet discussed plans for the holy month, which sees the Muslim faithful fast from dawn until sunset. However, Iranian mosques have been closed and Friday prayers canceled across the country for fear of contagion.

Khamenei urged the Shiite faithful to pray in their homes during Ramadan. Shiites typically pray communally, especially during Ramadan, which sees communities share large meals and greetings each night.

Iran has reported over 66,000 confirmed cases of the new virus, with over 4,100 deaths. However, experts have repeatedly questioned those numbers, especially as Iran initially downplayed the outbreak in February amid the 41st anniversary of its 1979 Islamic Revolution and a crucial parliamentary vote.

Khamenei’s comments come after Egypt’s Ministry of Religious Endowments called off all celebrations and late-evening prayer services for Ramadan, including mass charity iftars, the traditional dinners when Muslims break their daily fast. Mosques and churches have already closed for prayers across Egypt.

The Egyptian government has insisted the virus is under control as infections increase in the country of 100 million. A prominent heart surgery center in Egypt identified a cluster of coronavirus cases on Thursday, the second health facility in a week to become a source of infection.

The Magdi Yacoub Heart Foundation in the southern city of Aswan, established by a leading Egyptian-British transplant surgeon, said it had identified four cases, one patient and three security guards, and placed them into isolation. The hospital said it would monitor those showing symptoms and sterilize the wards, while continuing to treat urgent care patients.

Nearly 20 medics in Egypt’s main cancer hospital tested positive for the coronavirus earlier this month, raising fears of rapid transmission in health facilities across the Arab world’s most populous country. The death toll from the virus rose to 103 on Thursday, from among over 1,500 cases.

The pandemic also looms over holiday celebrations in Lebanon, where Muslims and Christians make up most of the population. The government on Thursday extended movement restrictions for two more weeks, from Easter Sunday to the start of Ramadan, including a nighttime curfew, shut-downs of public institutions and driving restrictions to reduce traffic. Lebanon has recorded 582 infections and 19 deaths.

In its report, Amnesty said thousands of prisoners in at least eight prisons had rioted over their fears about potentially contracting the virus while incarcerated, and that it believes at least 35 inmates were killed by security forces. There have been sporadic reports in Iranian media about the riots, with only one fatality announced.

“It is abhorrent that instead of responding to prisoners’ legitimate demands to be protected from COVID-19, Iranian authorities have yet again resorted to killing people to silence their concerns,” Amnesty’s Diana Eltahawy said in a statement.

Estimates suggest the Islamic Republic’s prison system held some 150,000 prisoners just prior to the new coronavirus pandemic. In the time since the outbreak took hold, Iran has temporarily released some 105,000 prisoners. Those who remain held include violent offenders and so-called “security” cases, which often translates to political prisoners.

Iranian President Hassan Rouhani has ordered the country’s economy to slowly begin opening back up starting Saturday, leading to worries the nation could see a second wave of infections. The Islamic Republic’s economy is suffering under intense U.S. sanctions after President Donald Trump unilaterally withdrew from Tehran’s 2015 nuclear deal with world powers.

Khamenei, who has final say on all state matters, made a point to remind Iranians that the U.S. is the main enemy and mocked Americans who fought over toilet paper at stores and lined up outside of gun shops to purchase firearms.

“The problem of coronavirus must not make us ignorant of the plots of enemies and the arrogant power,” he said.